Webinar for the Earth to Sky Community of Practice

This webinar provided an Update about NASA's ABoVE Research Campaign activities being planned for 2017.

View the recording on our webinar archive: May 17, 2017 Webinar with Peter Griffith 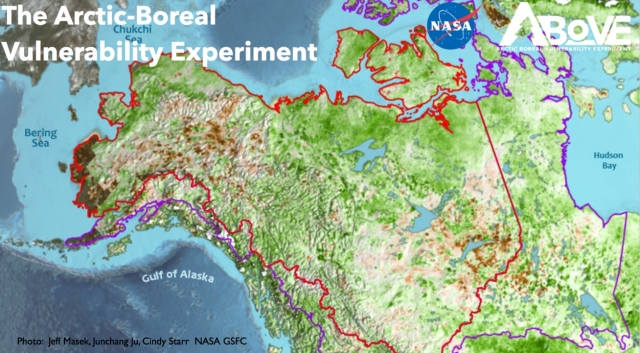 The Arctic Boreal Vulnerability Experiment (ABoVE) is part of a broad international effort to study the environmental and societal effects of climate change. Over the next decade, scientists from NASA and other public and private organizations are focusing on this northern region that spans about 2.5 million square miles. The multi-year field campaign will investigate ecological impacts of the rapidly changing climate in Alaska and northwestern Canada, and examine such topics as the thawing of permafrost, the expansion of wildfires, and changes to wildlife habitats. Come and participate in a discussion with NASA’s Dr. Peter Griffith, Chief Support Scientist for NASA’s Carbon Cycle and Ecosystems Office and the ABoVE campaign. Peter will describe the scope of these studies, the focus of the research into the vulnerability and resilience of ecosystems, the implications of changing systems on society and human activities, and detail how individuals can get involved as the campaign progresses. He will also explore the significance of this work for other regions of the world. For more info: http://above.nasa.gov.

See also, this related report released this week at the Arctic Council:

Dr. Peter Griffith is the founding director of NASA’s Carbon Cycle and Ecosystems Office, and is Chief Support Scientist for the Arctic Boreal Vulnerability Experiment (ABoVE). He also directs the team that supports the Carbon Cycle & Ecosystems Focus Area at NASA HQ, NASA’s Carbon Monitoring System (http://carbon.nasa.gov); and the North American Carbon Program (http://www.nacarbon.org), a component of the U.S. Global Change Research Program.

For the first time in over a century a total solar eclipse will be visible over the entire United States, August 21, 2017. This spectacular total solar eclipse will be visible within a 70-mile wide path stretching across the continental U.S. beginning in mid-morning on the Oregon coast, crossing the United States, and finally disappearing on the South Carolina coast by mid-afternoon. 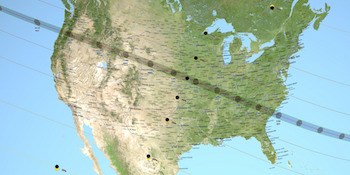 click for larger (high resolution) Those in the path of totality will have the rare opportunity to safely see the Sun’s corona, the beauty of Baily’s beads and the dazzling diamond ring effect. You can get a sense of how the eclipse will progress at your location at http://bit.ly/2ffhTdi

This eclipse will be a unique and powerful opportunity for sharing the excitement of science and the wonder of the Sun and Moon as they create a total solar eclipse on Earth.

The webinar series covers basics about solar eclipses, touches on NASA's research on the Sun, Moon and the Sun-Earth connection, and explores activities, resources and ideas for connecting the eclipse experience with major interpretive themes in parks, refuges and other interpretive sites.

You may view any or all of the sessions which were held January - March 2017.

Thursday, February 2 – Our Sun is an Above-Average Dynamic Star!

Tuesday, February 14 – Without the Moon There Would Be No Eclipse! 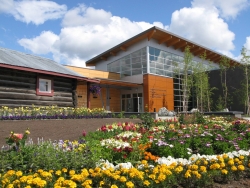 What’s currently going on with climate change in Alaska, and how do we best engage audiences on climate issues?  If you’ve been wondering about these and similar questions, save-the-date October 21st, and join the Earth to Sky interagency partnership for an in-person mini-course in Fairbanks, with our partners from NASA, National Park Service, and many other agencies and organizations. Join us!

And best of all, learn how to stay connected to these scientists and communicators over time.  You’re not alone in your efforts - and here’s proof there’s lots of help available!

Where:   Fairbanks, Alaska - at the Morris Thompson Cultural and Visitors Center