You can become a Lunar Ranger 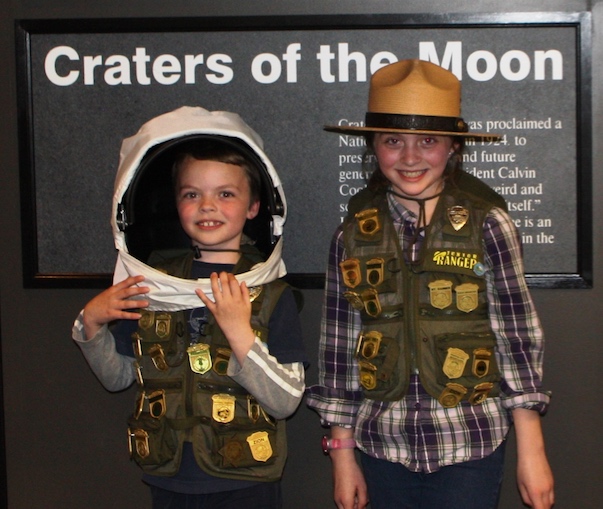 Craters of the Moon National Monument and Preserve (CRMO) is the only place in the universe where kids and their parents can become a Lunar Ranger. Ted Stout, Chief of Interpretation at the monument and alumnus/coach from many Earth to Sky courses, invites his visitors to get their own Lunar Ranger booklet on-site or on-line at the park website.  That’s the best way to earn an official Lunar Ranger Mission Patch and to complete the interactive activities that help them to follow in the footsteps of the astronauts, to learn more about their own backyards here on Earth, and to reach beyond them, for the stars! 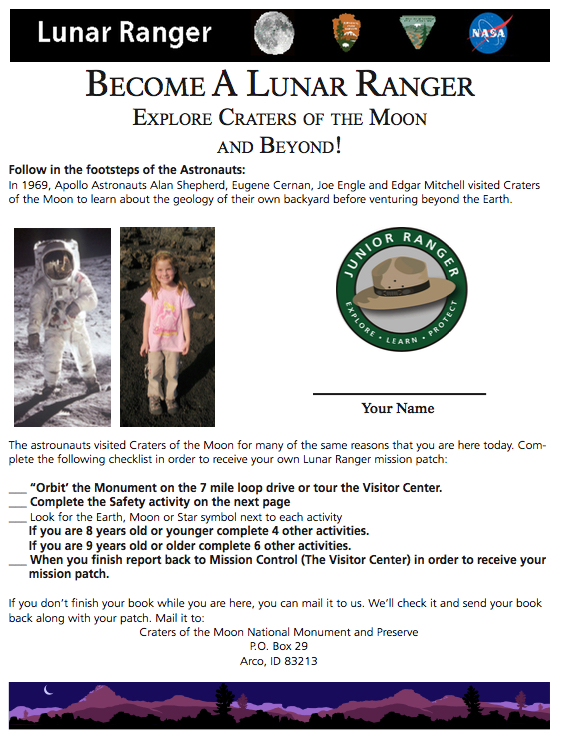 The Lunar Rangers booklet was one of the original ETS projects developed by Ted Stout during one of the early workshops. CRMO’s Lunar Ranger program was created as one of several ways visitors could explore the moon and learn how to help protect America's national parks. 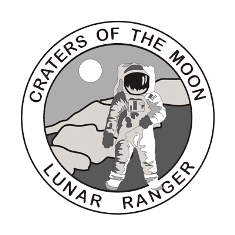 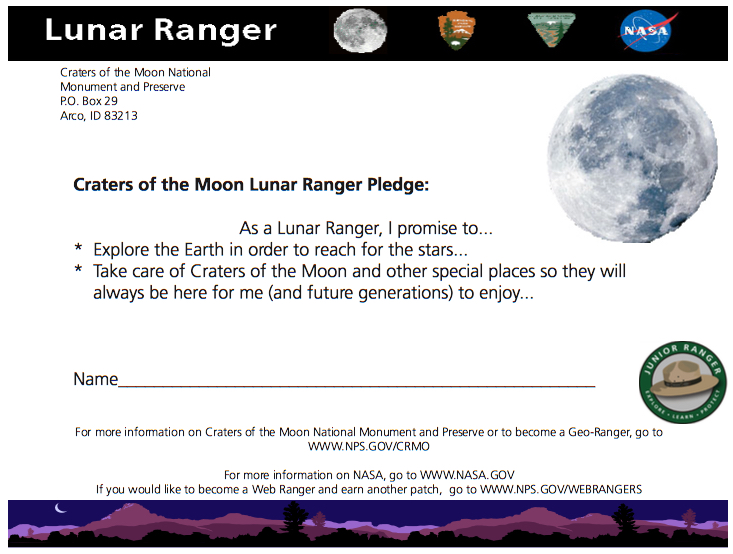 Much like NASA’s Apollo astronauts Alan Shepard, Edgar Mitchell, Joe Engle, and Eugene Cernan, who explored CRMO’s lava landscape and learned the basics of volcanic geology in preparation for future trips to the moon, visitors and students can visit the park today and learn, explore, and eventually pledge to take care of these special places for future generations to enjoy.  It keeps another NASA - NPS partnership alive and well, at the same time. 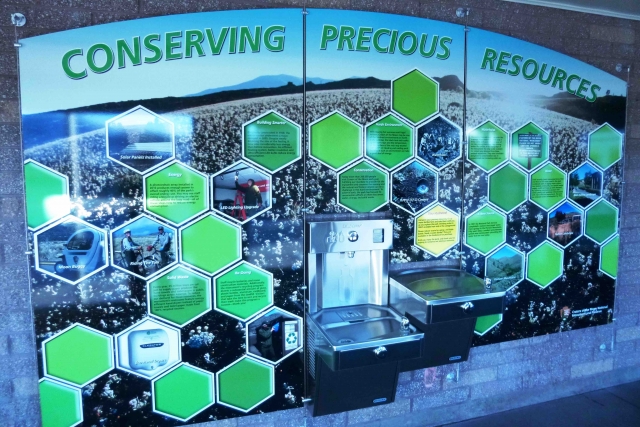 Since development of the Lunar Ranger, several additional projects have been created and installed at CRMO using information and resources discovered through ETS activities.  As a Climate Friendly Park, sustainability is a consideration in virtually all management actions taken, including in the interpretive and educational efforts at the park.

Park staff have developed exhibits and waysides that interpret on-going activities of sustainability to reduce operations in three key areas: energy, waste and water. The recently renovated visitor center uses considerably less energy now than before renovation, despite nearly doubling in square footage. Better insulation and inexpensive steps such as temporary storm windows in winter have been put in use. Ultra-efficient LED bulbs now light some park housing units, and a new photovoltaic array installed in 2010 produces enough power to offset roughly 25% of the park's overall energy use, further reducing the park's reliance on fossil fuels. Further, the park recently obtained two all-electric vehicles for staff transport. When combined with electricity produced by the photovoltaic array, these vehicles are very close to zero emission.

The result: Craters of the Moon uses the least energy per square foot of any park in the region. 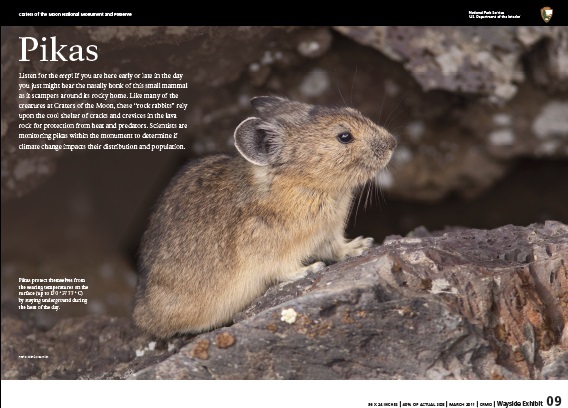 A wayside highlighting research on climate impacts to Pikas will be placed on one of the most popular trails, the North Crater Flow Trail. "Like many  of the creatures at Craters of the Moon, these 'rock rabbits' rely upon the cool shelter in the lava rock for protection from bears and predators. Scientists are monitoring pikas within the monument to determine if climate change impacts their distribution and population." 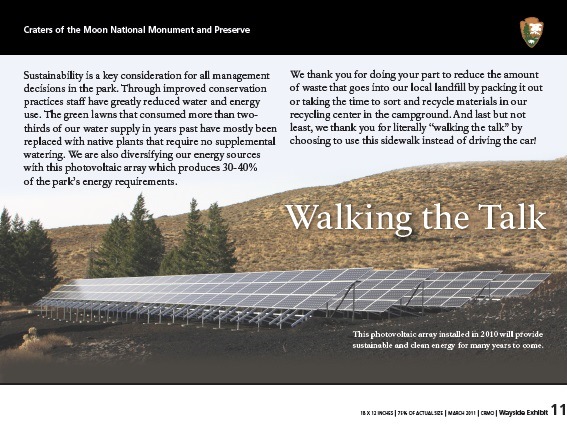 In "Walking the Talk,"  a wayside discusses how sustainability is being used as a key consideration by park management in making their decision about the monument.  "Through improved conservation practices, staff have greatly reduced water and energy use. The green lawns that consumed more than two-thirds of our water supply in years past, have mostly been replaced with native plants that require no supplemental watering. We are also diversifying our energy sources with this photovoltiac array which produces 30-40% of the park's energy requirements." 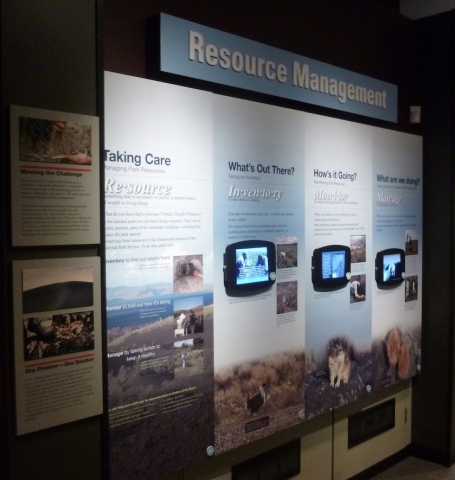 "What do you have that is Precious? Family? Health? Finances?

Regarding the sustainability efforts: “I'm very proud of the progress we have made on this issue here at this remote park,” describes Ted recently. “Our Facility Manager, Dwayne Moates, has even become a champion of sustainability in the NPS, narrating a short film, ‘Greening the Moon,’ available on the park’s website.”

For more details about these creative products: 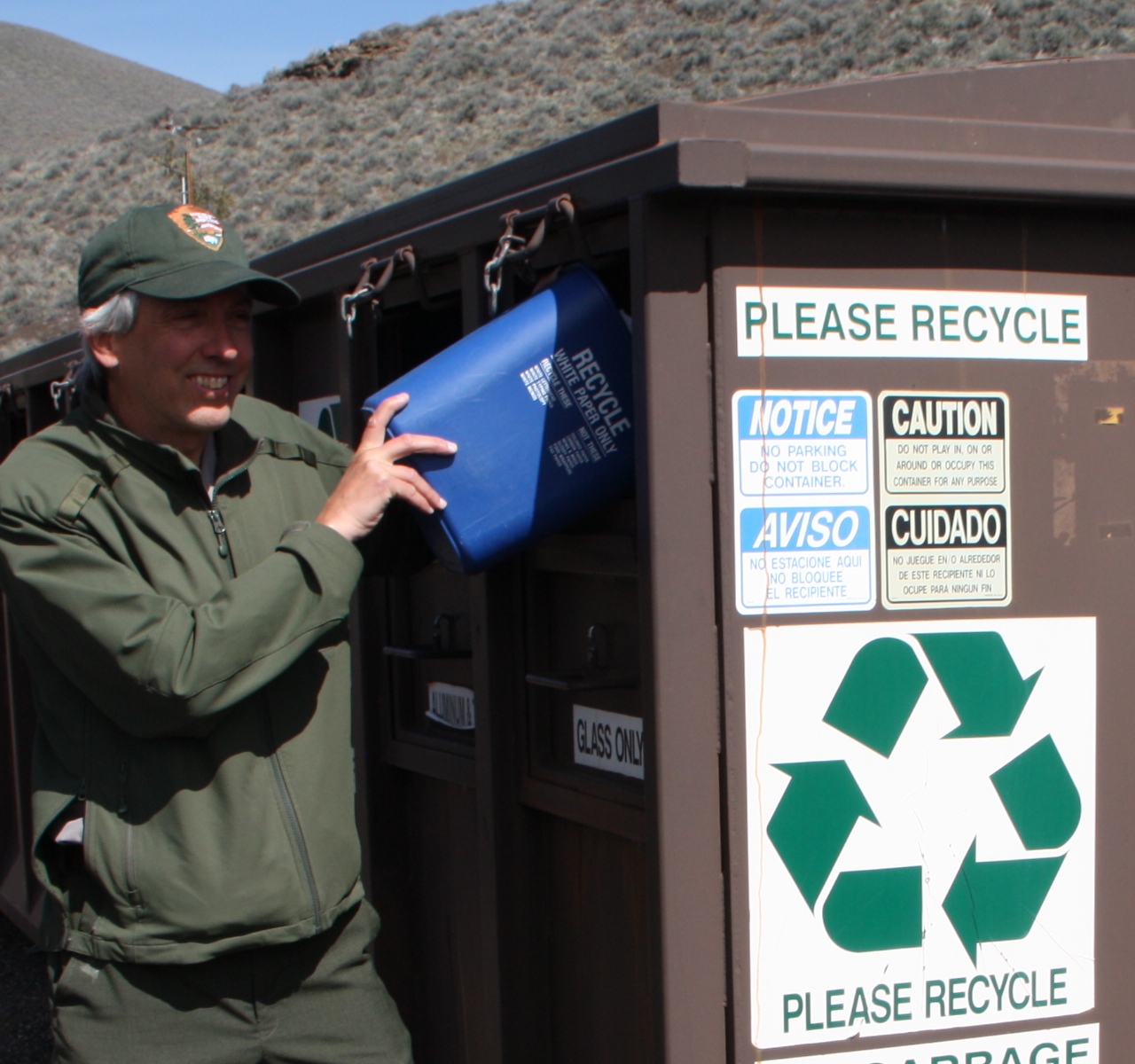 Ted Stout
Chief of Interpretation and Education
Craters of the Moon National Monument and Preserve
P.O. Box 29
Arco, ID 83213
This email address is being protected from spambots. You need JavaScript enabled to view it.
(208) 527-1330