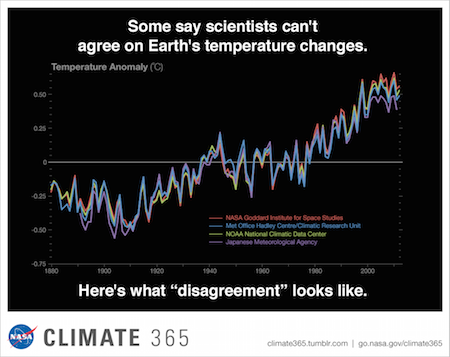 The international talks in Paris (COP21) seem to be all about carbon - how much there is in the atmosphere, the ocean, the plants, the permafrost and fossil fuels. How much carbon is moving, where, when, what can we do to alter the amount being released by human activity, how much do we need to reduce, etc. So, it seems an appropriate time to post a list of resources about carbon!

Here are a number of NASA resources on carbon, including short and long articles, short and long videos, visualizations and graphics. All are free, but please credit NASA if you share or use in your products/programs.

A Breathing Planet, Off Balance

As carbon dioxide levels in the atmosphere continue their rapid, man-made rise, NASA scientists and others are confronted with important questions: How long can this balancing act continue? And if forests, other vegetation and the ocean cannot continue to absorb as much or more of our carbon emissions, what does that mean for the pace of climate change in the coming century?  This article explores this line of research and includes several downloadable visualizations.

Carbon and Climate Press Briefing (1hr)  A panel presentation by NASA climate scientists, including a series of visualizations, followed by Q&A with the new media.

"We're NASA scientists studying the role of carbon in our planet's climate. Ask us anything!" See how the scientists in this archived Reddit Ask Me anything session addressed questions from the public about climate. Some really interesting questions and answers are posted!

NASA's Earth Now App  A free app you can use on mobile devices, to  view stunning visualizations of climate change data from NASA's Earth satellites on a 3-D model of Earth that can be rotated and manipulated for an all-encompassing view of our world's vital stats. Choose from extensive visual data maps including sea level, ozone, carbon dioxide and water vapor to monitor and study climate patterns across the planet.