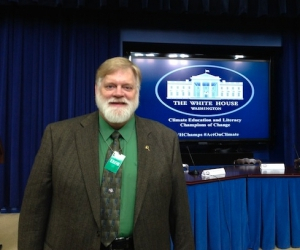 We are extremely excited that Earth to Sky alumnus John Morris (National Park Service, retired) has been honored as one of eight people selected as White House Champions of Change for Climate Education and Literacy. On February 9, 2015, a ceremony was held at the White House offices, to honor these leaders in climate communication/education.

The event celebrated Americans who are doing extraordinary work to enhance climate education and literacy in classrooms and communities across the country. The Champions of Change program was created as an opportunity for the White House to feature individuals, businesses, and organizations doing extraordinary work to empower and inspire members of their communities.

John traveled to Washington, D.C. to accept the honor and participate with fellow Champions, in a panel on climate change education and literacy moderated by Marshall Shepherd, the Georgia Athletic Association Distinguished Professor of Geography and Atmospheric Sciences at the University of Georgia and Host of The Weather Channel’s “Weather Geeks.”

The event included remarks by President's Science Advisor, and Director of the White House Office of Science and Technology Policy, Dr. John Holdren and other officials. 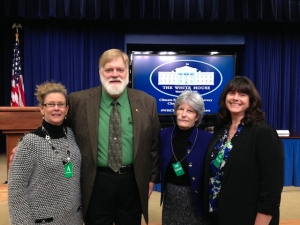 John was joined by ETS folk (pictured at left - Sandy Spakoff, John, Anita Davis and Becky Lacome) who also participated in a follow-on roundtable discussion about place-based education, with experts from the community. This session was co-facilitated by Earth to Sky lead Anita Davis and USFWS Chief of Visitor Services for National Wildlife Refuge System Kevin Kilcullen. Discussion centered on the value of place-based education as being uniquely and powerfully suited for educating the public about climate change; and on practitioners’ needs for delivering programs that build climate literacy among the public, including citizen science, professional development and science resources. Discussion concluded with a consensus of a need for a place-based education practitioner’s forum that could help the community share knowledge, best practices and useful resources. 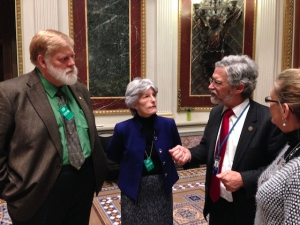 Following the roundtables, the White House Office of Science & Technology Policy and the Environmental Protection Agency co-hosted a reception to honor the Champions of Change, with the generous support of the National Environmental Education Foundation.  The reception took place in the Indian Treaty Room, where we visited with other Champions and educators, and enjoyed a brief moment with Dr. John Holdren, Director of the White House Office of Science and Technology Policy, and President's science advisor.

Synopsis of the Nomination Narrative

John Morris, an Interpretive Program Manager for the National Park Service (NPS) in the Alaska Regional office, recently retired after 34 years of public service.  Mr. Morris was one of the first seasonal rangers hired to work in Alaska National Interest Lands Conservation Act parks in 1981.  He has worked actively on a national basis over the past 10 years to develop exhibits and publications, provide training to interpreters and educators, and to help park managers to manage and communicate about the implications of climate change in National Parks.  In 2014, he was part of a team that published the first statewide visitor guide and iBook about climate change in Alaska’s National Parks, entitled “State of Change.”  Mr. Morris also served for seven years as the NPS coordinator for the innovative partnership called Earth to Sky, which brings together scientists, park rangers, and environmental educators from NASA, NPS, the U.S. Fish and Wildlife Service, and many other agencies and entities in a national community of practice addressing climate literacy.