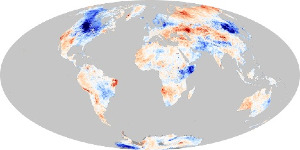 There have been a series of news articles lately, with headlines similar to this, that may be misleading the public or at a minimum confusing the issue. Knowing that those of you in the field may be getting questions, here is a little info, and some links for those who would like to explore more.

Let’s first get back to some fundamentals, by recalling the definition of “Global Warming.” Global warming includes all of Earth’s systems: air, land, water, ice, life, and refers to an overall warming of the entire planet. It’s global, not just air, or water, or land, or ice.

Near surface air temperatures in the last decade have leveled off

The news articles are based upon science journal articles examining the causes for air temperature trends near to Earth’s surface, which do show a slowing or stalling within the past decade, compared to the rate of increase we had been previously experiencing. However, recall that the atmosphere absorbs only about 2% of the planet’s heating. The ocean, meanwhile, absorbs about 90%. So, if a part of the atmosphere remains stable for a while, but oceans and land keep on warming, the planet still warms overall.

The fact remains that adding CO2 to the atmosphere does trap heat, by amplifying the natural greenhouse effect. The question the scientists are hoping to answer is, where does that heat go? For instance, it could go to the atmosphere (in one or another of the layers), or the land, or the sea (surface or other layers), or ice. In the 1980s and 1990s air temperatures were increasing, as predicted by the models, but over the last decade the air temperature has somewhat leveled off. So scientists are now asking why is the air not continuing to warm at its earlier pace? Note that the question is not, “Why has global warming slowed?” The authors all agree that the overall Earth temperature still is going up at a rapid pace. Global warming has not slowed or stalled.

So, what are the scientists thinking is the answer? Where is the heat going? 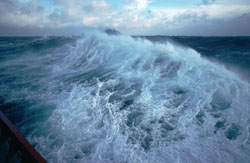 In a nutshell, the current thinking is that the deep ocean is absorbing more heat than it was.  In an April 2013 Nature Climate Change article titled, Retrospective prediction of the global warming slowdown in the past decade, Virginie Guemas and colleagues described their model that successfully improved predictions of the slowdown in temperature rise. They then used this model to explore the physical processes at work. They examined how much things like volcanic eruptions and changes in pollution levels (aerosols reflect the Sun’s rays and contribute to cooling), and changes in solar activity (we are in a solar minimum) affected the modeled air temperatures.  The model helped them to exclude these potential causes, and instead pointed to deep ocean warming as the main reason for slowdown of air temperatures rising. But according to a different article by Doug  Smith (Nature Climate Change June 25, 2013), this cannot be confirmed because the network of ocean observations is too sparse.

Current climate models include predictions that over time some decades will show less or more change, within a background of continued overall warming; but which decades show changes, and by how much has not been predicted so clearly.  Scientists are interested in making models that can better predict when we can expect decades that will have less change, and decades that will have more dramatic change. As the accuracy of our measurements continues to improve, we should expect that better predictive models will result. So of course, more research is needed, and hopefully that research will lead to better models that will help us to understand Earth’s climate system better, ultimately leading to more informed decision making.

Here is the abstract from the original article by Guemas et al:

Despite a sustained production of anthropogenic greenhouse gases, the Earth’s mean near-surface temperature paused its rise during the 2000–2010 period1. To explain such a pause, an increase in ocean heat uptake below the superficial ocean layer2, 3 has been proposed to overcompensate for the Earth’s heat storage. Contributions have also been suggested from the deep prolonged solar minimum4, the stratospheric water vapour5, the stratospheric6 and tropospheric aerosols7. However, a robust attribution of this warming slowdown has not been achievable up to now. Here we show successful retrospective predictions of this warming slowdown up to 5 years ahead, the analysis of which allows us to attribute the onset of this slowdown to an increase in ocean heat uptake. Sensitivity experiments accounting only for the external radiative forcings do not reproduce the slowdown. The top-of-atmosphere net energy input remained in the [0.5–1] W m−2 interval during the past decade, which is successfully captured by our predictions. Most of this excess energy was absorbed in the top 700 m of the ocean at the onset of the warming pause, 65% of it in the tropical Pacific and Atlantic oceans. Our results hence point at the key role of the ocean heat uptake in the recent warming slowdown. The ability to predict retrospectively this slowdown not only strengthens our confidence in the robustness of our climate models, but also enhances the socio-economic relevance of operational decadal climate predictions. Reprinted by permission from Macmillan Publishers Ltd. Nature Climate Change 3: 649–653 copyright 2013

SkepticalScience has a piece on this topic. Included is a nice graphic that depicts the amount of heat absorbed by different components of the Earth’s systems. http://www.skepticalscience.com/clarifying-continuation-global-warming.html

A fairly readable article about Guemas’ work, appeared in Nature Climate Science, but unfortunately is only open to subscribers. In case you have access you can take a look at http://www.nature.com/nclimate/journal/v3/n7/full/nclimate1938.html