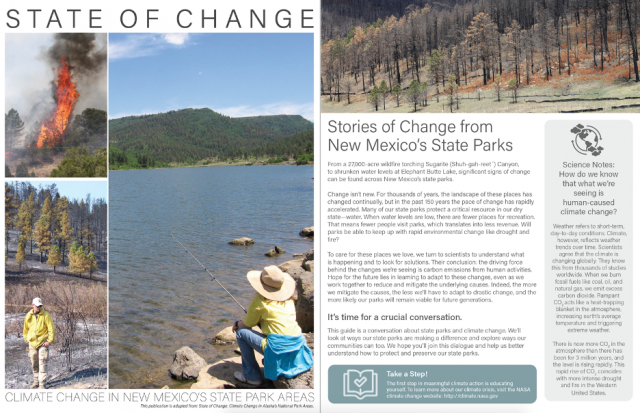 The brochure has been posted on the New Mexico State Parks website; download a copy of the PDF here: State of Change BrochureWhat can you do if you’re already interpreting the climate crisis in programs, but you suspect some of your agency co-workers may not accept climate science? Well, one option is to tackle that challenge within an Earth to Sky action plan.

Here’s a new publication being distributed in New Mexico, developed by ETS Alumna, Pat Walsh, a regional interpretive ranger for New Mexico State Parks. It was developed when, working from home during the COVID quarantine over the last year, the opportunity allowed her to focus on developing the brochure. It’s adapted from a similar 2014 publication, “State of Change: Climate Change in Alaska’s National Parks."

“I realized I wanted to communicate to an internal audience as well as an external one,” said Pat Walsh, regional interpretive ranger for New Mexico State Parks. Pat attended the ETS pre-conference workshop in Fall 2019 at the National Association of Interpretation annual meeting in Denver.

“At the workshop, they gave us copies of a great climate brochure created by the National Park Service in Alaska,” she said. “The light bulb went off and I realized I could do a mini version for my state.” New Mexico has been pursuing a climate solutions agenda under the leadership of Gov. Michelle Lujan-Grisham. “I figured if we had a climate brochure that was approved by our State Parks headquarters and distributed at our parks, it might impact our staff members as well as the public,” Pat said. 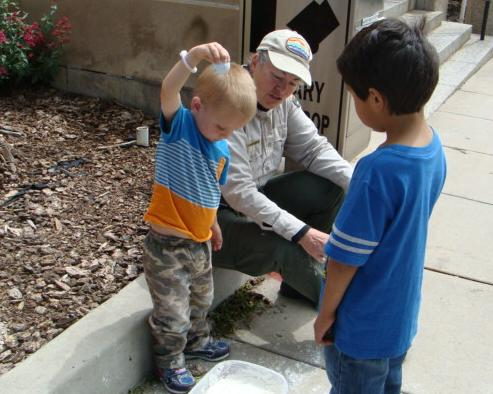 After consulting with her supervisor, Pat began work on an eight-page New Mexico version of the 24-page Alaska model. “I really appreciated that the Alaska brochure included many voices, such as indigenous people, scientists and so on,” she said. “I didn’t need to re-invent the wheel. I just looked for people who could speak on climate issues for our state park areas.” 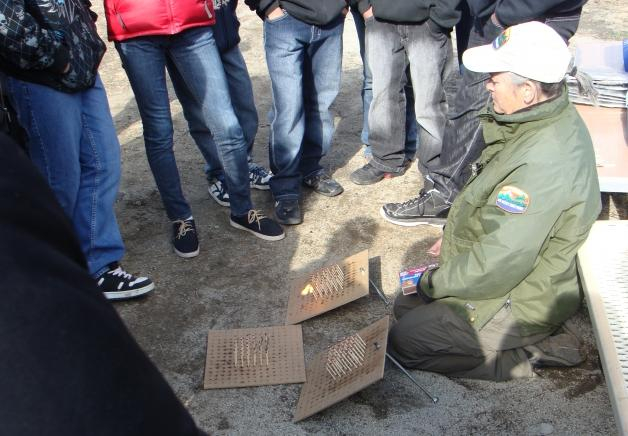 Pat works with middle school kids doing a flooding experiment as part of a climate resilience and emergency preparedness program.Sugarite Canyon State Park Superintendent Robert McIvor explained why he switched from real candles to battery-operated ones for an annual Christmas luminaria event. That’s because he was a “nervous wreck” one super-dry year, monitoring 1,500 lit candles inside paper bags.

Pat worked with the State Parks graphic designer on final formatting and the brochure was approved for distribution in June 2021. Pat, who presents a climate resilience program for sixth graders in Raton, N.M., chose a hopeful, uplifting quote from one of them to end the brochure.

“Our young people are going to be the most affected by this crisis,” she said. 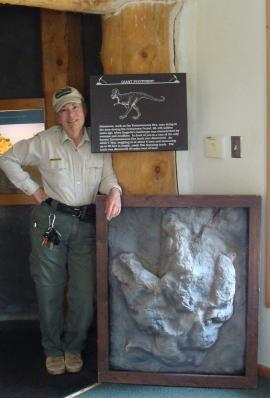